While trying to define the new type of society that is so very dearly needed, several coaching groups have attempted to define what that new form should take and what it takes to get there. The normal limitation of the language created under the actual societal structure makes it very difficult to elaborate a new construct.

In fact it has been so difficult to plow a new ground using these old tools and words that we see most new recent developments (eg.g social media) as a threat. The reality is that until now the language we use did not help us improving our humanity. At worst, the language of control-based management is coercive and violent, at best the language of democracy gives an illusory window that always edges us into apathy.

Leadership (or its new siebling, "champion") is one of those old words created to rally the mass into activity. I would argue that it did serve some good purpose, acknowledging the tremendous sufferings of the many. I would suggest that the word itself now limits our capacity to create that new world we so strongly aspire to and need.

An image I particularly like is the geese's skein (V-formation) because it introduces the concept of servant leadership and of non-dogmatic leadership: the leaders change in time. This introduces the notion that it is the responsibility of all to be a leader, at the right time and the right place. If one knows the rules governing skeins, it also introduces the notion that one has to learn skills before leading but that it is achievable for all and that there are many ways of leading. Although very well adapted to simple contexts, I would also like to propose that we need another image or model that would accommodate more complex systems: especially the one called reality :-)

The next step is to use the skein metaphor to acquire an image that is more akin to the complexity of our new acquired complex reality (through internet and social media), namely a swarm. This image opens up the possibility that at any point in times there are several opportunities of reflection and action. By limiting as we did until now, our reflection and action to one individuals, the leader, we sacrifice engagement, creativity, adaptability, and more importantly openness, and ethics.

As with any image, one may want to focus on the positiveness of the image as there is always destructive ways to use an image. For example, it is not the predatory aspect of the image that is of value I would argue but the new notions related to leadership. 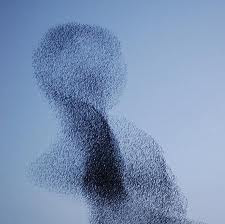 One maybe needs to understand the mechanics of a swarm to fully appreciate the usefulness of the image. Swarms form because there is an opportunity: a concentrated amount of food in the form of insects clouds. The swarm is created because the probability for a single bird to catch an insect increases if it is "helped" by the presence of others since there is no way to go for the cloud of insect which otherwise can and will evade a single bird. In front of a swarm, the insect evade into the mouth of the next bird. In our societal example, we swarm together for the good of yes mankind because the world awareness gained through the internet and its child, the social media.

These insect clouds move in a tri-dimensional world, so must the swarm. At any point in time, there are several "food opportunities" at the edges of the swarm. In the traditional model of society, a leader has a very small chance of being at the right place and the right time. This leads to starvation of the flock or in terms of human societies to vain pursuits or despotism.

It is most useful at the introduction of the concept to understand that a swarm is everything but chaos. Several rules are agreed upon for the swarm to be effective at catching opportunities (aka insects). For example, in a swarm, one individual will encounter an insect cloud and move toward it therefore becoming the leader of the moment. This state may stay for a while or change as the insect cloud change direction and a new "leader" is born. One can envision that part of the swarm or all of it will move toward the new opportunity depending on its nature, and it is OK maybe even wise for us not to pursue all the same goal.

Clearly though the definition of leadership is not the same anymore and I think that is for the good since we all know that timeless leadership corrupts and that limitless delegation of power de-responsibilises. Social media are new tools that allow for the swarm to be created, grow, adapt, respond, at the speed of the events and most importantly in an open way. This last point being the potential for the base of a new world ethics.

Both the skein and the swarm are images of the same concept of society where each one of us has a place, a responsibility and is being rewarded at the same time. A swarm is also a good example in that when there is no insect cloud (aka opportunity) the swarm dissolves. It will recreates itself somewhere else where there is an opportunity. This is particularly important because our economic systems, our religious systems and societal structures have always fought extinction despite irrelevancy thereby creating the vast majority of our historical human sufferings. By opening up what drives us through swarmship, I would argue that the risk and opportunities to "coerce" for false survival might be diminished.

Although it is clear that a bird swarm responds to several rules to be functional, I do not know how these rules would translate into the new society we are running into or creating but for example, false impulse in a wrong direction happens in a bird swarm but are corrected more rapidly than in a single leader model. There are many more biological rules that governs the success and the beauty of a swarm and I suspect there will be as many such social agreements in that new society of ours but I believe these rules as the swarm will evolve as well. We must learn to be OK with the end of a swarm: there will be another one where there will be a real opportunity. We must engage into creation at the proper time, and into engaged participation for the swarm to be created, grow, thrive, and die ... and that is all OK. 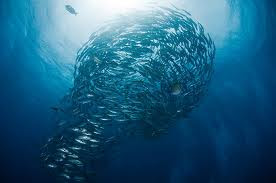 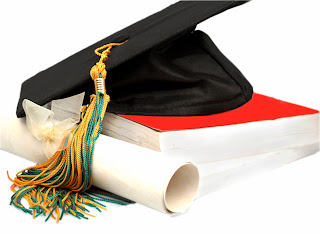 Violence never serves its master... yet one has to ask if access to higher education should be based on money or merit. I think that after some thoughts most would go for merit. We should take time to define merit as a society but at the end of the day, money is a criteria that through history has led to much sufferings.

As for the feasibility of it, well, many countries do not have tuition fees as they based their right of attendance on a mix between passion, hard work, and talent and decided that for those individuals, they are willing to pay the price. This has the great collateral of having those who attend higher education strictly for the pedigree it confers to them, do something more adapted to their calling.

Posted by Jacques at 8:16 AM No comments: